This post is a non-exhaustive quick overview of the so-called “unidirectional data flow” architectures. Not meant to be taken as a beginner tutorial, but rather as an overview of their differences and peculiarities. At the end, I’ll introduce a new architecture which deviates significantly from the others. This post assumes client-side Web UI frameworks only.

It would be confusing to talk about these architectures without a common terminology, so let’s assume the following.

Architectures might use the term “View” with drastically different connotations. Instead, we use “rendering” to refer to the common understanding of “View”:

User interface rendering is the graphical output on the screen, commonly expressed as HTML or some comparable high-level declarative code such as JSX.

A User interface (UI) program is any program which takes user events as input and outputs rendering, as an ongoing process rather than a one-time transformation.

The DOM and other layers such as frameworks and libraries are assumed to exist between the user and the architecture.

Ownership of inter-module arrow matters. A--> B is different than A -->B. The former is Passive programming, while the latter is Reactive programming. Read more here.

A unidirectional architecture is said to be fractal if subcomponents are structured in the same way as the whole is.

In fractal architectures, the whole can be naively packaged as a component to be used in some larger application.

In non-fractal architectures, the non-repeatable parts are said to be orchestrators over the parts that have hierarchical composition.

First compulsory mention goes to Flux. It cannot be said to be the absolute pioneer, but at least in terms of popularity, it is the first unidirectional architecture for many people. 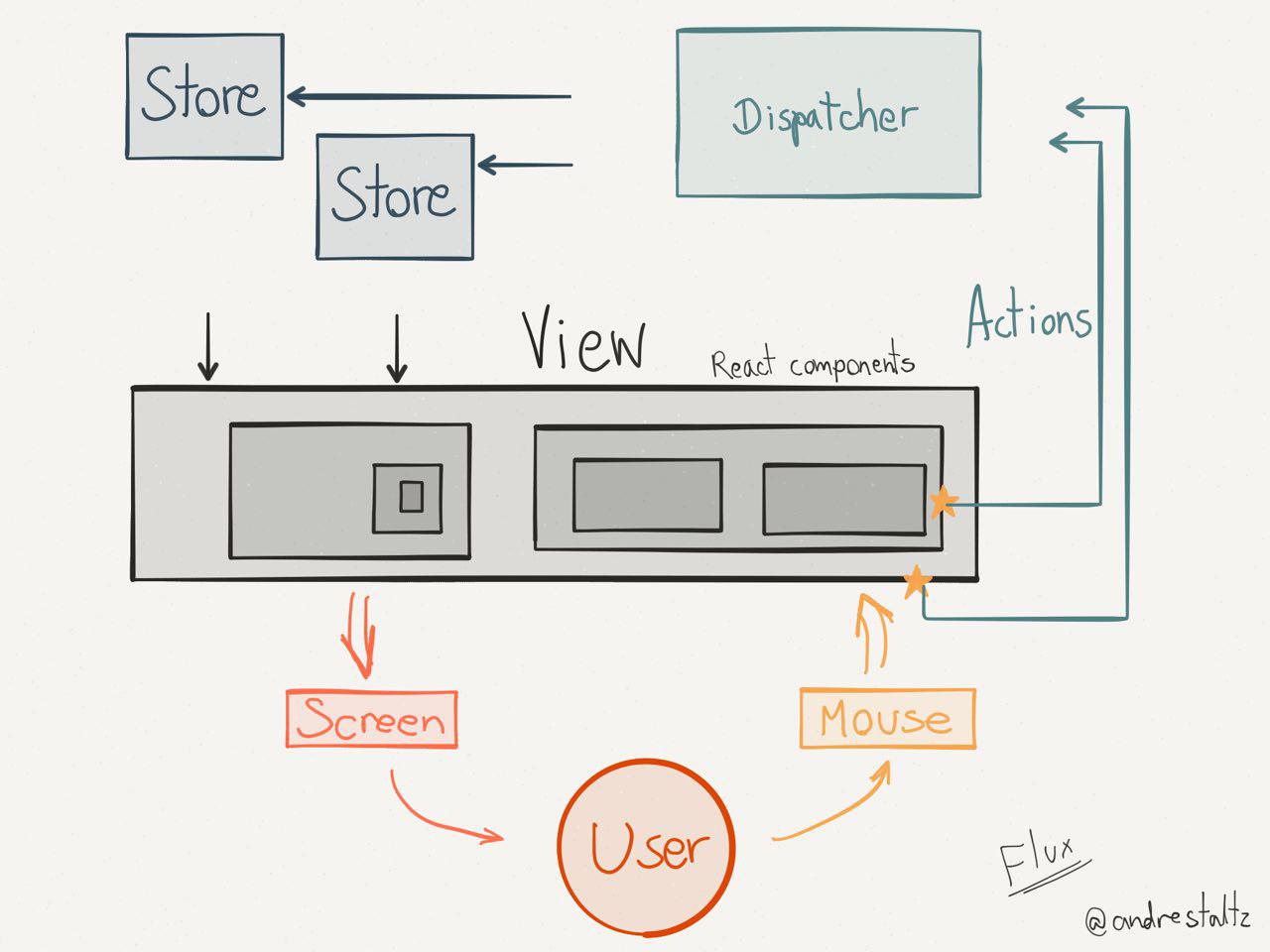 Dispatcher. Because this is an event bus, it’s a singleton. Many Flux variants remove the need for a dispatcher, and other unidirectional architectures don’t have an equivalent to the dispatcher.

Only View has composable components. Hierarchical composition happens only among React components, not with Stores neither with Actions. A React component is a UI program, and is usually not written as a Flux architecture internally. Hence Flux is not fractal, where the orchestrators are the Dispatcher and the Stores.

Redux is a variation of Flux where the singleton Dispatcher was adapted to become a singleton Store. The Store is not implemented from scratch, instead, it is created by giving a reducer function to a store factory. 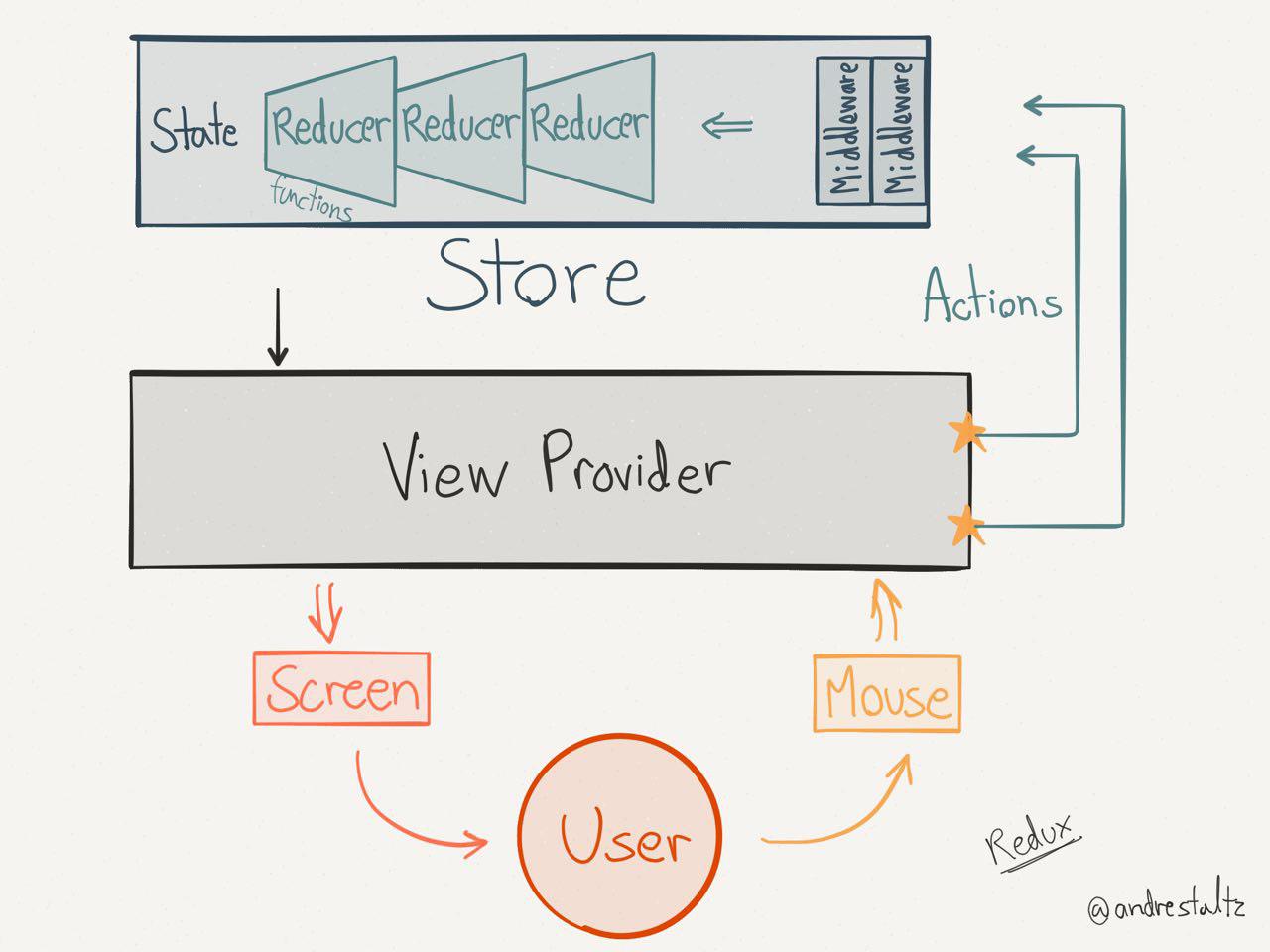 Factories for stores. A Store is created using the createStore() factory function, taking a composition of reducer functions as argument. There is also a meta-factory applyMiddleware() function which takes middleware functions as arguments. Middlewares are mechanisms of overriding the dispatch() function of a store with additional chained functionality.

Providers. Redux is unopinionated with regards to the “View” framework used to make the UI program. It can be used with React or Angular or others. In the context of this architecture, “View” is a UI program. Like Flux, Redux is not (by design) fractal and the Store is an orchestrator.

User event handlers may or may not be declared in the rendering. It depends on the Provider at hand.

The Famous Framework introduced Behavior-Event-State-Tree (BEST) as a variant of MVC, where the Controller is split into two unidirectional elements: Behavior and Event. 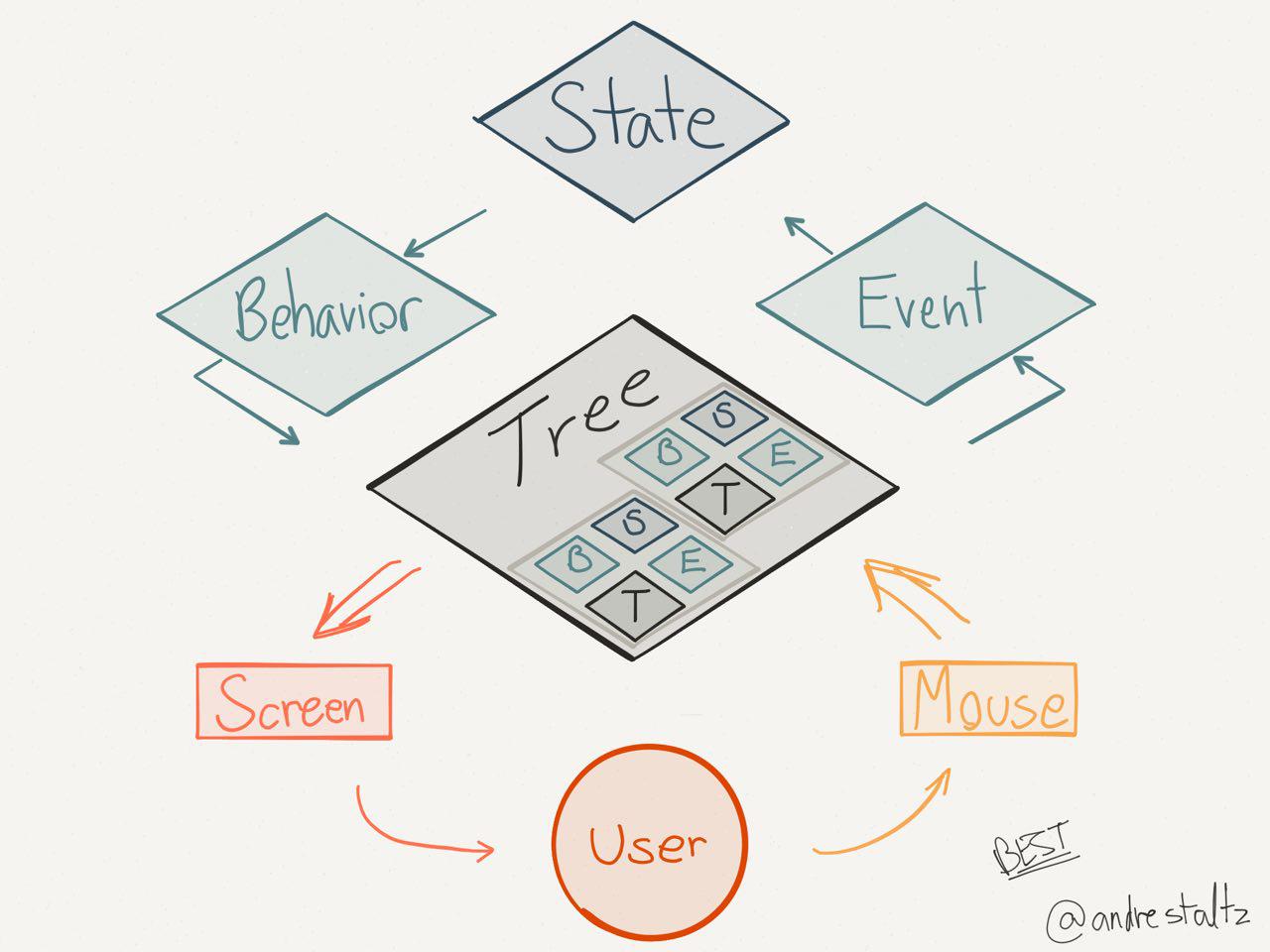 Multi-paradigm. State and Tree are fully declarative. Event is imperative. Behavior is functional. Some parts are reactive, other parts are passive (e.g. Behavior reacts to State, and Tree is passive to the Behavior).

Behavior. Not seen in any other architecture in this post, the Behavior separates UI rendering (Tree) from its dynamic properties. These are allegedly different concerns: Tree is comparable to HTML, Behavior is comparable to CSS.

In the context of this architecture, “View” is a Tree, and a “Component” is a Behavior-Event-Tree-State tuple. Components are UI programs. BEST is a fractal architecture.

Also known as “The Elm Architecture”, Model-View-Update shares similarities to Redux, mainly because the latter is inspired by this architecture. This is a purely functional architecture because its host language is Elm, a functional programming language for the Web. 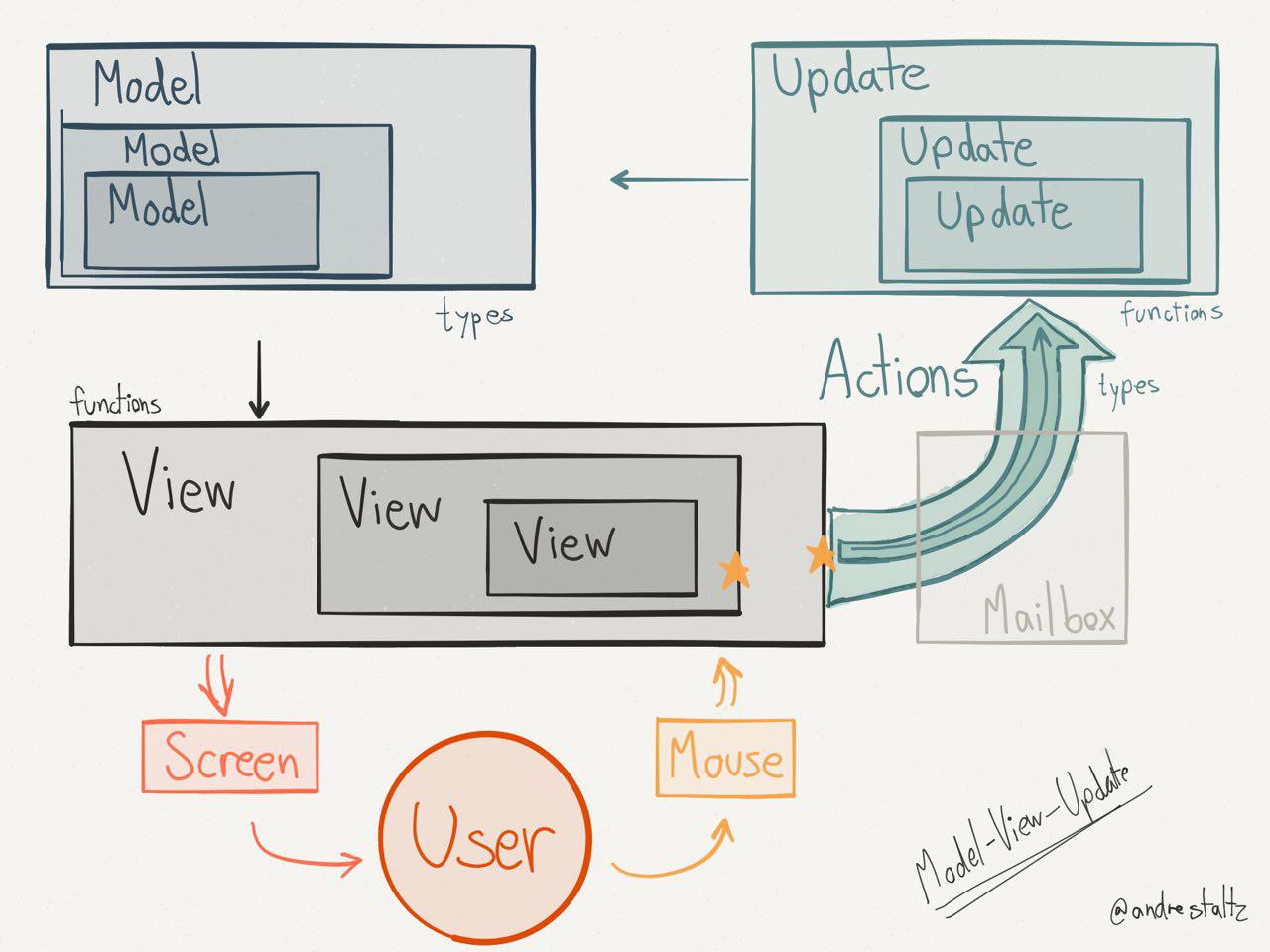 Components are exported as pieces. Because of the hierarchical composition everywhere, a “component” in the Elm Architecture is a tuple of: a Model type, an initial Model instance, a View function, an Action type, and an Update function. There cannot be components which deviate from this structure throughout the whole architecture. Each component is a UI program, and this architecture is fractal.

Introduced as a fully reactive unidirectional architecture based on RxJS Observables, Model-View-Intent is the primary architectural pattern in the framework Cycle.js. The Observable event stream is a primitive used everywhere, and functions over Observables are pieces of the architecture. 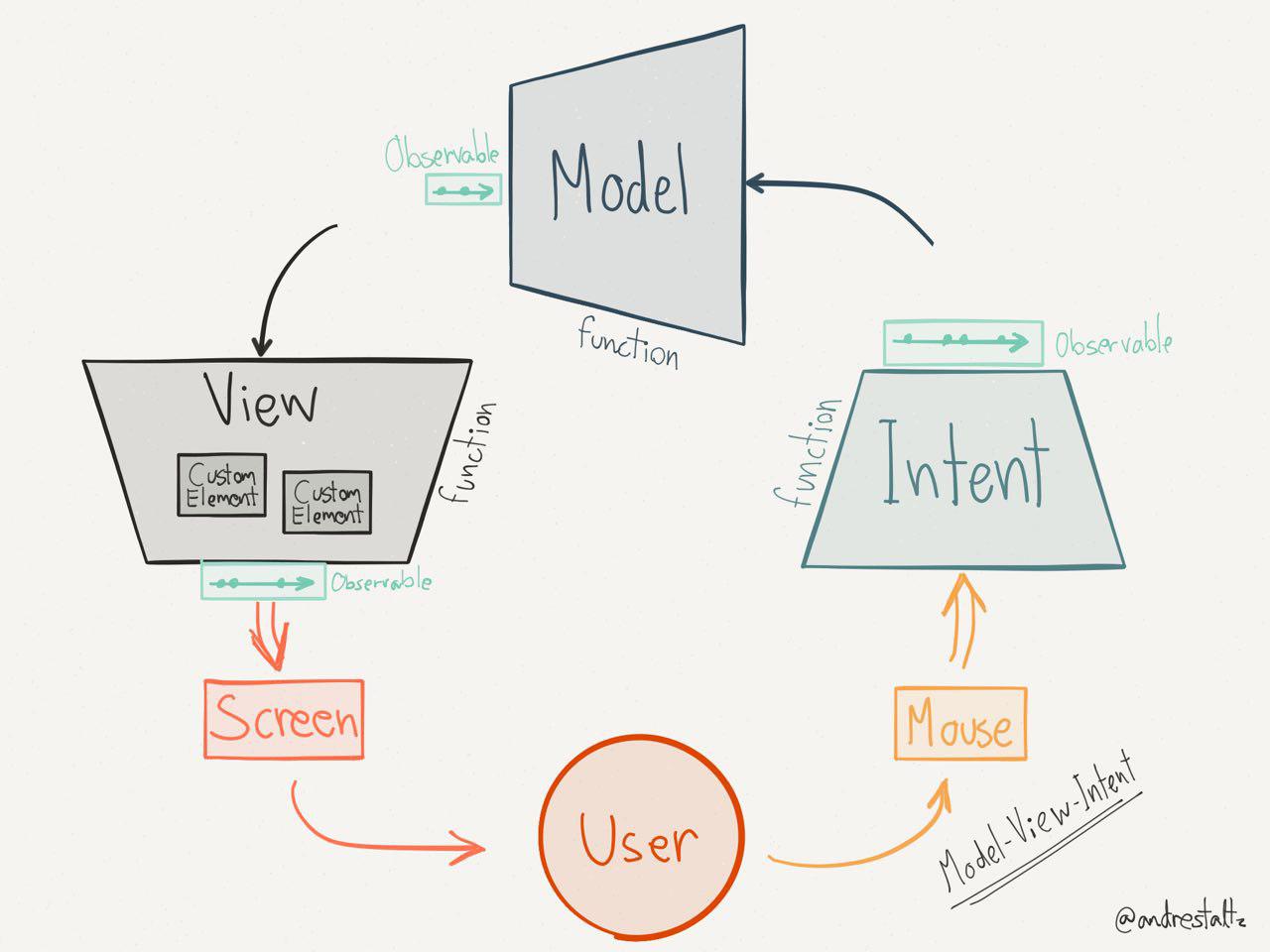 Heavily based on Observables. The outcome of each part of the architecture is expressed as an Observable event stream. Because of this, it is hard or impossible to express any “data flow” or “change” without using Observables.

Intent. Roughly comparable to Event in BEST, user event handlers are declared in the Intent, separately from rendering. Unlike BEST, Intent produces Observable streams of actions, which are like those in Flux, Redux, and Elm. Unlike Flux and others, though, actions in MVI are not directly sent to a Dispatcher or a Store. They are simply available for the Model to listen.

A MVI tuple is a UI program. This architecture is fractal if and only if all custom elements are implemented with MVI.

This blog post introduces Nested Dialogues as a new unidirectional architecture meant for Cycle.js and any other approach based solely on Observables. It is an evolution of the Model-View-Intent architecture.

Start from the fact that a Model-View-Intent sequence can be functionally composed as a single function, a “Dialogue”: 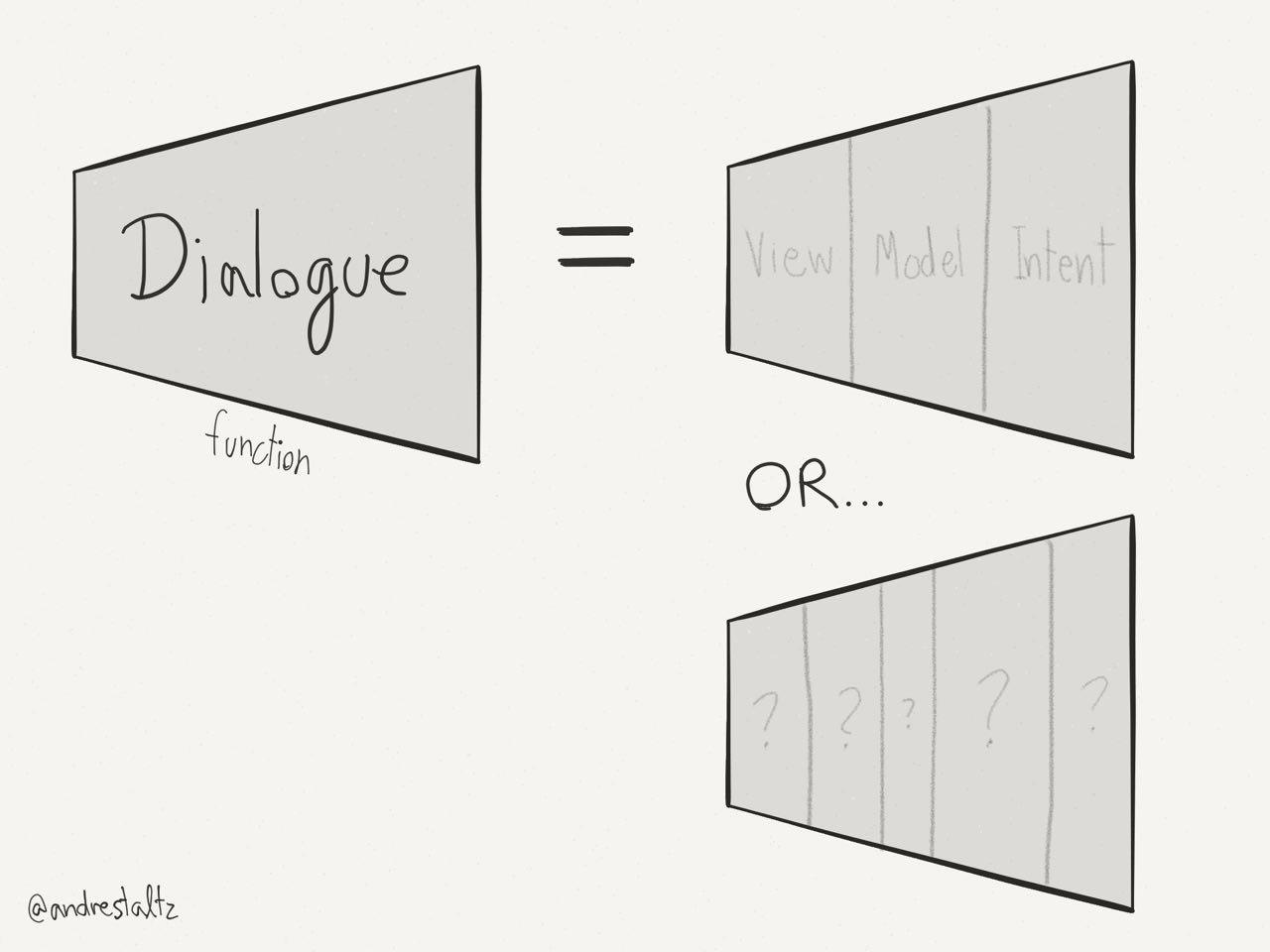 This is how Model-View-Intent restructured as a Dialogue looks like: 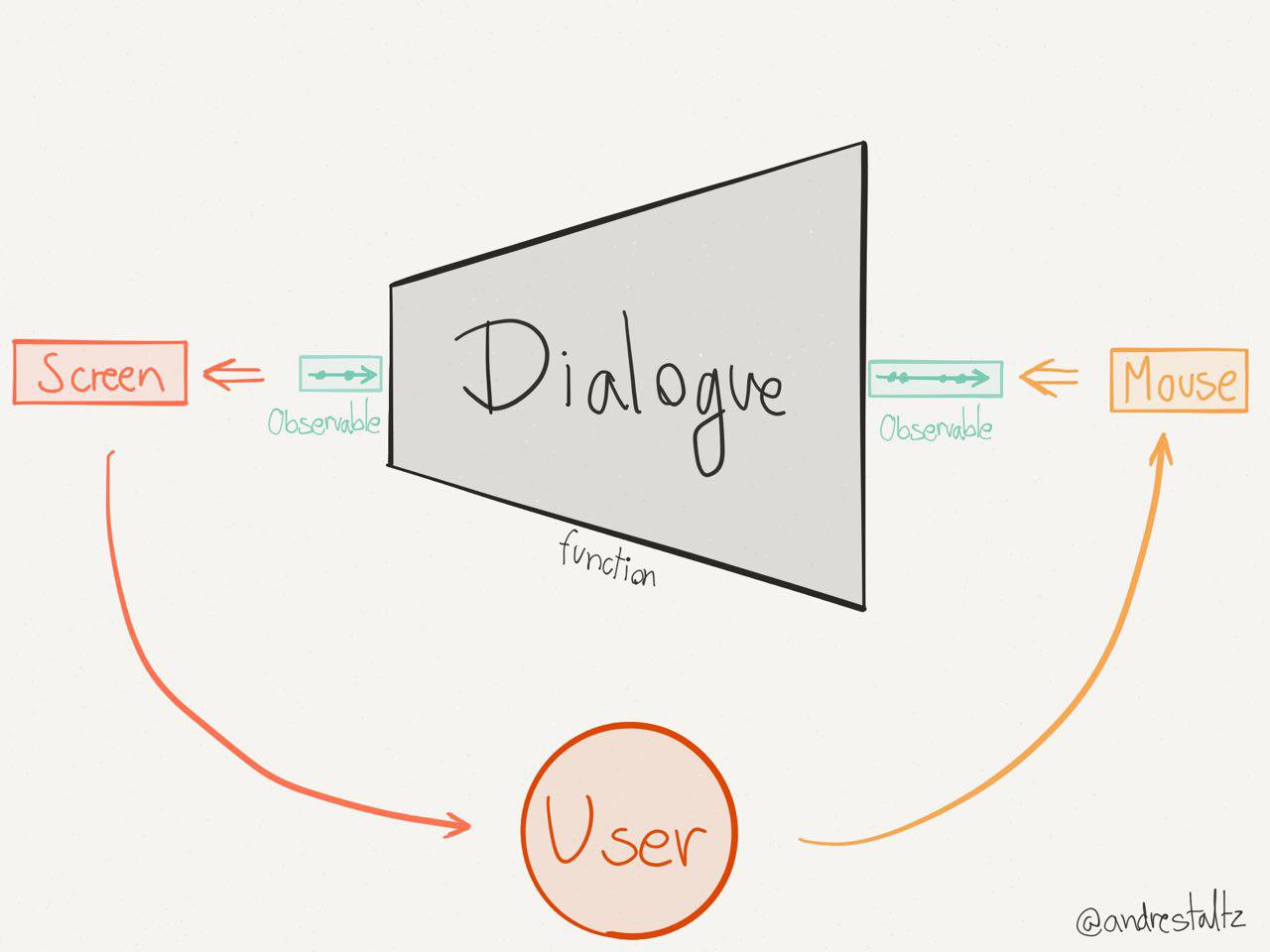 To reuse a Dialogue function as a subcomponent UI program in a larger program is a matter of nesting a Dialogue inside another one: 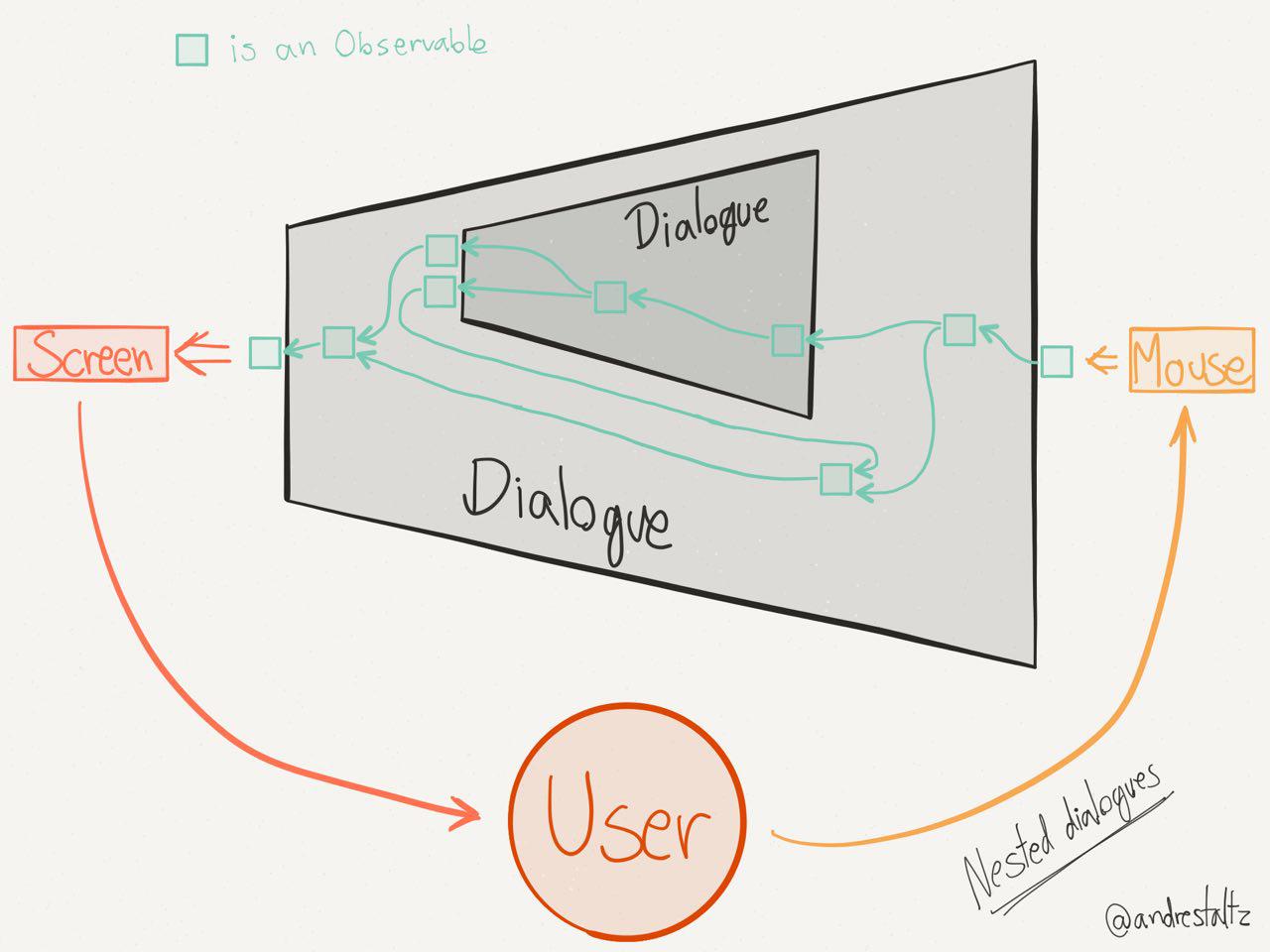 The wiring of Observables between layers of Dialogues is a data flow graph. It is not necessarily an acyclic graph. There are cases such as dynamic lists of subcomponents where a cycle is needed in the data flow graph. Examples of such are beyond the scope of this blog post.

Nested Dialogues is in fact a meta-architecture: it has no convention for the internal structure of a component, allowing us to embed any of the aforementioned architectures into a Nested Dialogue component. The only convention regards the interface of a Dialogue’s extremes: input must be a (collection of) Observable(s), output also must be a (collection of) Observable(s). If a UI program structured as Flux or Model-View-Update or others can have its output and inputs expressed as Observables, then that UI program can be embedded into a Nested Dialogues program as a Dialogue function.

This architecture is therefore fractal (with regards to the Dialogue interface only) and general.

See this TodoMVC implementation and this small app as examples of Nested Dialogues with Cycle.js.

While the generality and elegance of Nested Dialogues can be theoretically used to embed other architectures as subcomponents, I am mainly interested in this architecture for structuring Cycle.js applications. I have been searching for a UI architecture which feels natural and flexible, while at the same providing structure.

It should be a flexible architecture as well, because as we saw, the internal structure of a Dialogue can be freely implemented with any pattern. This is in contrast to Model-View-Update which has a rigid structure as convention. Fractal architectures seem more reusable than non-fractals, so I’m glad Nested Dialogues has this property too.

However, some common structure can be helpful to guide development. While I believe the internal structure of a Dialogue could be Flux, I think Model-View-Intent fits the Observable input/output interface naturally. So while I want to be free to not implement a Dialogue as MVI, I acknowledge most of the times I will structure it as MVI.

I don’t want to be pretentious to say this is the best user interface architecture, because I have just discovered it and still need to use it in the wild to see its pros and cons. Nested Dialogues is just my strongest bet at the moment.